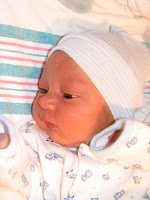 What a Blessing!!
Matthew was born on February 20, 2006. He was born full-term and healthy to the best of our knowledge. I immediately started breastfeeding as breastfeeding went really well with my daughter so I figured I wouldn't have any issues. Unfortunately, Matthew did not want to latch on. His arms would flare all over the place...he was restless and just didn't seem to get it. I saw a lactation specialist after a couple of weeks and when Matthew finally did start breastfeeding semi-well, my milk didn't seem to agree with his stomach. I finally gave up after 4 or 6 weeks and put him on formula. Matthew became colicky after starting formula. He would cry for hours...he would literally crawl up my body and he arched his back frequently. He would only sleep on his tummy and that was after what seemed like an eternity of misery. At the 2nd or 3rd month, we switched Matthew to Alimentum formula. The nurse at our pediatrician's office said that it may take a couple of days before we notice a difference; but that was not the case. The change came within 20 minutes. He was completely calm...a different baby. Life was good!

About this same time, we noticed Matthew had a slight retraction at the neck, although there was never any indication of his breathing hard in any way. We asked the doc about it and she said that some kids are just floppier than others and that he should grow out of that... 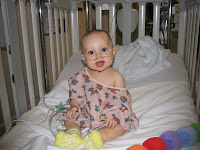 The Episode!
So, life was good. No more problems until... Halloween weekend. Matthew was 8 months. My daughter actually came home with a fever about a week before and they both developed bad colds, with nasal mucus that seemed like a river. After several visits to the pediatrician's office, Matthew was finally transported and hospitalized for Bronchiolitis/Hypoxemia with an oxygen saturation of 81% awake. He's been ill ever since.... 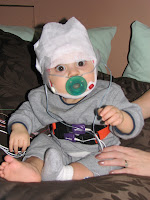 he night, we noticed he breathed alot with his tummy, and would even stop breathing for several seconds, so we ended up doing a sleep study. To our amazement, Matthew had developed sleep apnea and had to have his tonsils and adenoids removed. We requested oxygen before the surgery because his sleep study indicated he had low O2 levels at night and I was really paranoid about that. His surgery went really well and we were discharged but Matthew continued to need the oxygen despite the surgery and he's been on it ever since.

Taking out the tonsils and adenoids seemed to help Matthew's sleeping, but his continued need for oxygen was a complete mystery and he was still getting sick with colds and vomiting. More tests were done, different doctors were consulted, nutrition factors became worrisome and we became impatient and frustrated always wondering if what we were doing was the right thing for him.

A Lung Disease?
The first mention of Interstitial Lung Disease was by a doctor who seemed to be more concerned about being in co 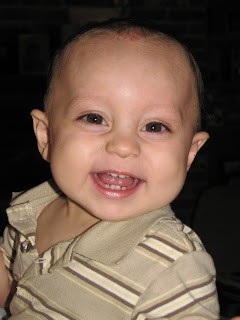 ntrol and taking over than Matthew's well being. The bed-side manner of this person was very cold and the whole situation freaked me out. Our local doctor disagreed with the diagnosis so we dismissed ILD, somewhat, for a while.

I continued to search the net. I came across a story about a little boy who was diagnosed with Interstitial Pneumonititis...it sounded exactly like Matthew...he grew out of his need for oxygen and to my knowledge is doing well today. I spoke to our pulmonologist about this and ILD was again dismissed because there was no concrete evidence on his HRCT (High Resolution CT Scan). In fact, I was told his scan was normal, when indeed it was not.

Matthew always had cycles. He would be ok for about 2 or 3 weeks and then start with the runny nose, then coughing, then vomiting and then breathing fast...he would lose weight and then he would get better and we'd start all over again. It was exhausting.

We did get a definitive diagnosis on the fact that he has Gastroparesis aka DGE (Delayed Gastric Emptying). This means that he does not digest his food fast enough and he feels full a lot of the time. After eating well for a while the food just sits and accumulates until he gets the urge to vomit. He is on medication for that and now he only vomits occasionally. This disorder, however, is difficult to deal with and can be more frustrating than his pulmonary issue.

Anyway, unfortunately, we still had no answers as to why Matthew needed oxygen. If it wer 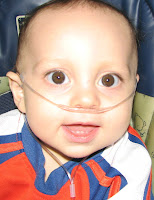 en't for the fact that we had the oxygen at home, I do believe Matthew would have been in the hospital on many other occasions.

Since asthma kept coming up time and time again (most ILD kids are misdiagnosed with asthma), we took Matthew to the Asthma/Allergy Specialist. He was put back on steroids, continued breathing treatments, allergy meds and meds for his stomach problems. Nothing seemed to really help.

I continued to search the net and was looking up reflux issues one night when I came across the Parent-2-Parent support site. This site provided me with so much information/advice on many of his issues and also led me to the Yahoo chILD parent support group. I can't begin to tell you how grateful I am for these sites. I have met some incredible people, with truly amazing stories of their own. We also found the right doctor for Matthew.

Finally!
After reading many posts, from different parent's, about their doctors and similar situations, I saw there was an actual list of doctors. I immediately went there and decided to shoot a HELP ME PLEASE email to Dr. Lisa Young at Cincinnati Children's Hospital. That was the best decision I ever made. 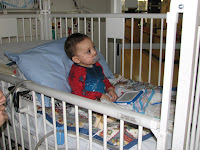 g quick response, we sent all our medical info to her and made our appointment. She had indicated right away that his first HRCT was not normal and should be repeated. First, we did another sleep study then another HRCT, later a Bronchoscopy with lavage and finally, his lung biopsy. I am happy to report that we now have a definitive diagnosis of NEHI (Neuroendocrine Hyperplasia in Infancy). Obviously, I am not happy that Matthew has chILD, but this journey of the unknown is over...that has been the worst part. It has been a year and a half of worry and bewilderment and every day we would wonder if we were doing the right thing for him, whether it be with medications, contact with other people, isolation, diet, etc, etc, etc......

Anyway, the future of NEHI is still unknown and at present there is no cure; there are only 100 confirmed reported cases worldwide (now around 200 (updated Jan. 2011)). Research seems to indicate that most children will outgrow their need for oxygen in the earlier years; but this is not confirmed. More research is most definitely needed. I can honestly say though that right now I truly feel relaxed for the first time since he got sick. We've been able to get rid of some of the meds he was o 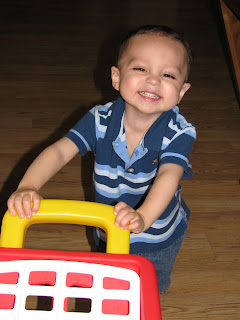 n, as it seems they may have been doing more harm than good. Really all he needs is his oxygen, the occasional breathing treatment and his stomach medication, unless he gets sick...but what a relief it is to finally know.

I truly hope that we can bring awareness to these Interstitial Lung Diseases. Most patients are misdiagnosed as I mentioned above and most doctors still don't know what NEHI is...this door is just now opening. NEHI is most definitely not the only ILD there is, and a lot of them do not have the greatest outcomes. I encourage anyone who reads this story to visit the chILD foundation site or read some of the other stories...Awareness is powerful and of great importance right now.

Don't Give Up!
For those of you still searching for answers of your own, please continue to ask questions and educate yourself on
your child's symptoms. There is a lot of support out there, take advantage. There were many times I doubted my own mommy intuition because everyone seemed to think he "looked fine", but I knew down deep inside, there was something more to all of this. So, in saying that, you may have to take the Road Less Traveled, even in the midst of your own fear. We pray that your journey of the unknown end soon.

For updates on Matthew and our family, please click on the link in the lower right hand column called "Our Family Stepping Stones". 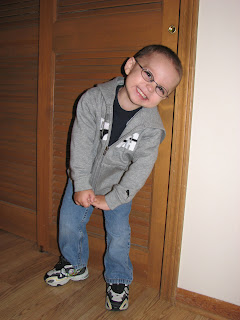 Trust in the Lord with all your heart and lean not on your own understanding; in all your ways acknowledge him, and he will make your paths straight. 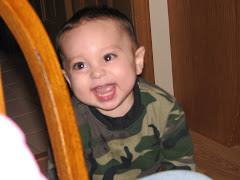 Children’s Interstitial Lung Disease (chILD) is a group of rare lung diseases found in infants, children, and adolescents. There are different types of chILD that vary in their severity and in their long term outcomes. In simplest terms, all types of chILD decrease a child’s ability to supply oxygen to their body.

(The above definition comes from: http://www.childfoundation.us/)

NEHI is short for Neuroendocrine Cell Hyperplasia in Infancy?

From my understanding, everyone is born with Neuroendocrine cells. These cells appear to play a role in lung development. Most of the time however, by the time infants reach 12 months of age, these cells have but mostly disappeared. Research suggests, but is not conclusive, that Kids with NEHI were either born with too many neuroendocrine cells, their bodies started reproducing more of these cells, or they were born with the right number of cells but the cells never went away(which means it’s taking their body longer to get rid of them).

It is still unclear why these cells remain/reproduce/return in the lungs of these kids and/or how it causes their symptoms. What we do know is that no lung transplantations or deaths have been reported for NEHI and that most kids outgrow their need for oxygen at some point. Research continues!

Other forms of chILD

Other chILD Links of Interest

The best way to prepare for life is to begin to live.
-Elbert Hubbard 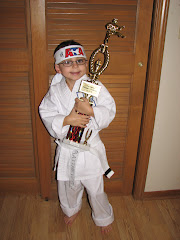 Hi, I am Four years old now and l love life. If you knew me, you'd know that I always have a smile on my face. I love to be outside. I play soccer in the summer, I've done gymnastics too; but right now, my favorite thing to do is Taekwondo!! It is so much fun! As you can see, I even won a trophy (smile)! I have been in pre-school now for 3 years and next year I start Kindergarten, I am really excited although I will miss my big sister as she will start 1st grade in another school. I like riding my bike and go-carts at Putt-Putt! I love to play chase, blow bubbles, sing, and hug on my doggies. I like my cars, trucks and Geo Tracks. French fries, pizza and potato chips are my favorite snacks when my tummy is feeling good. What do you like?

Me and my big sister Sara 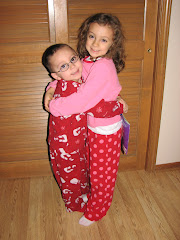 Sara's my best friend! We have a lot of fun together!

From our family to yours... 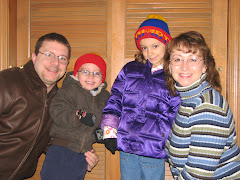 Take good care of yourself, have fun, and enjoy each other!